This is an author's commentary intended for readers who have already read the entire ILCOE. My retrospective comments on the chapter are in bold below, with some remarks within the text and then some overall thoughts at the bottom. The commentary will contain significant spoilers! Do not read the commentary on your first read-through! 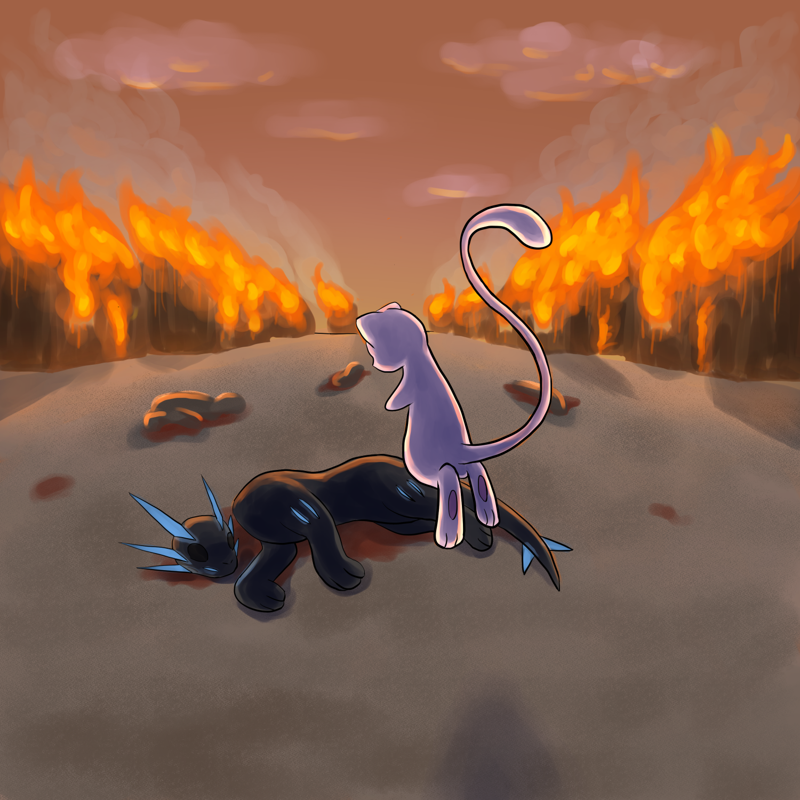 There was one thing that the torn apart ones had in common: while they lived, they had been known as Legendary Pokémon. These former streets contained the bodies of twelve Legendary Pokémon. All but two of them would soon be buried in the sands of time, forgotten and insignificant in history.

So this is when I capitalized 'Legendary'. I took this up in the HMMRCIG for some reason, when I decided to capitalize a bunch of random terms; thankfully I stopped doing that relatively quickly.

These two others had another thing to tell them apart from the other Legendaries, which was that they were not among the mutilated ones. And in fact, had anyone been there to compare them, he would have found the two distantly similar. Both of them had somewhat catlike heads and long tails with ovals on the ends, but one was smaller, pinkish-white and had a rabbit-like contrast in the length of the four legs, the front ones being short but the back ones long. It was breathing faintly. The other was larger, more human-shaped overall, had a light purplish gray body and a deep purple, muscular tail. It also had a large, drying wound in the middle of its non-moving chest, clarifying it as newly dead.

'Newly dead', insists the impersonal narrator. It's almost as if I did not yet know that this was actually a copy of Mewtwo's body that had never been properly alive to begin with. HMMMM.

So, obviously, when I wrote this prologue, I did not actually have the faintest idea what was really going on.

The prologue was added in the HMMRCIG, the first of the 3.x series of revisions (the ILCOE is version 3.2; for more on the story's many revisions, see the revision history). Previously, I had written the equivalent of chapters 1-30 in the prior revision (the UMR), and chapters 1-28 in the original/Good Battle Style, so the War of the Legends, and the story Chaletwo told of how he came to be, had been established; the prologue was simply a glimpse of that, through which I hoped to intrigue readers with the promise of what was to come. At this stage I still assumed everything Chaletwo told Mark there was true: I thought this was actual Mewtwo who had really been taken back in time by Chalenor, who really was the Preserver. Mew and Chalenor having been friends, and Mew being especially distressed at his death, was there, at least - but oh, I had no idea.

That whole story, of course, was originally invented for exactly one reason: because I'd made up a legendary that was literally just Mewtwo with murder-eyes and given him a major role in the story, and I had to justify this somehow. This was the entire reason I made up Chalenor, too: I figured for Chaletwo to make any sense, he had to be something with murder-eyes transplanted into Mewtwo's body, and one day I sat down to make up that something and drew a big cat with spikes. Eventually, this handwavy justification for eleven-year-old ridiculousness would form the underpinnings of the true backstory and all the major ending revelations - where it, of course, turns out to be 80% lies. The part that couldn't be lies, though, was the part I'd explicitly written into the prologue - so it was a good thing the prologue was pretty vague and mysterious!

I was really proud of the description here when I first wrote it. Now I find it pretty stilted, and in particular, the narrator's voice is wonky, jumping erratically between sounding dramatic and formal to jarringly casual (merely a bloody mess). That's largely just my English skills and not having a good enough sense of natural tone, I think.

This is technically the updated ILCOTEM version of the prologue, dating back to January 2005. The actual ILCOE version (August 2004) was much, much worse about this - at that point I just had no idea whatsoever how to do tone and the whole thing sounds absurdly flippant, in addition to being pointlessly gory (There were twelve or so dead Legendary Pokémon in these former streets in total – although admittedly, only two of them were not in bloody bits with their guts spread around). Looking at this version after rereading that, it actually sounds surprisingly competent in comparison.

The ILCOE, in turn, was a net improvement upon the two revisions prior to that, the virtually identical original HMMRCIG and the YAR, which interrupted the dramatic moment of Mew's scream at the end to immediately launch into an extremely stilted description of Chalenor (The same green shade was also on two spikes which came in place of ears, and four other spikes; two pointing in a 45 degree angle up and backwards from the sides of the head, two pointing horizontally backwards from the bottom of the upper jaw). The ILCOE wisely tones it down a bit, does not feel the need to tell you the exact angle of Chalenor's spikes, and moves the description to before Mew's reaction - although I can't entirely take credit for this, since I'm pretty sure it was a review from Farla that pointed out the 45-degree-angle thing was slightly ridiculous.

Speaking of that reaction, one final interesting change in the ILCOTEM prologue: “Chalenor!” sounded a desperate telepathic scream to “Chalenor…” sounded a weak telepathic voice. I'm really not sure why I changed this, especially since even at this stage the point here was Mew was desperate and about to attempt to resurrect Chalenor, and the scream kind of makes more sense in that context. Perhaps I just thought it fit better with the overall mood? Or maybe people had been misinterpreting it as Mew calling for someone else called Chalenor, and I thought this made it easier to tell that Mew was saying the name of the creature he was looking at? Who knows.