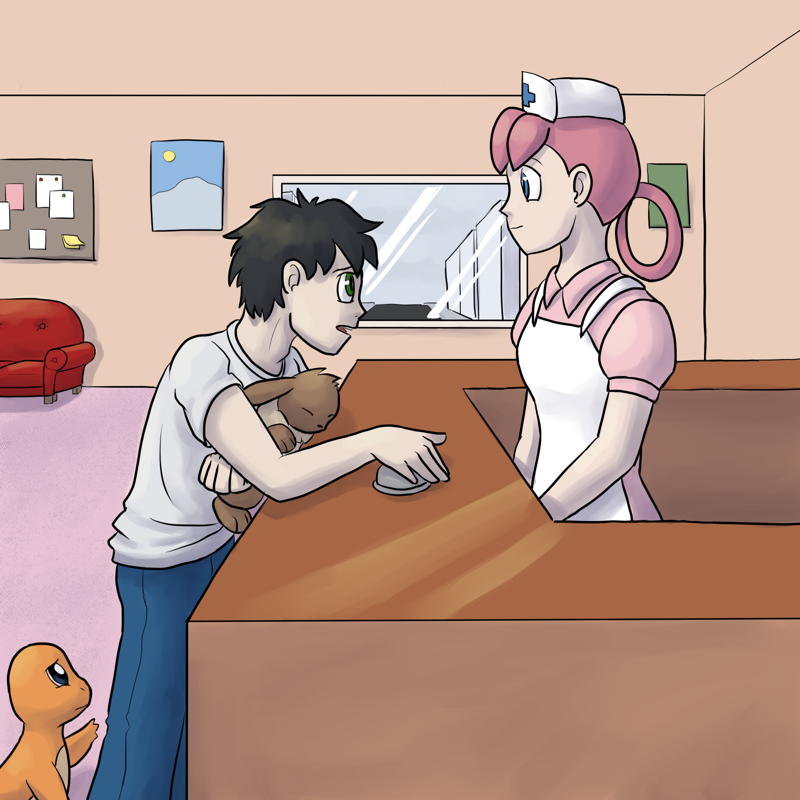 After ten minutes or so, Mark and Charmander arrived at the Cleanwater city Pokémon Center, panting.

Mark went straight up to the bell on the desk and hammered it with his hand until a red-haired nurse dressed in white, whose name was most likely Joy, came out of a room in the back.

“No need to be so harsh on the bell,” she said serenely.

“I… I found this Eevee,” Mark panted, attempting to catch his breath, and gently placed the little Pokémon, unconscious, on the desk. “He was fainted near the road to Sailance…”

“Sailance?” the nurse, whom Mark just decided to call Joy, questioned. “Isn’t that out of the Pokémon-inhabited area?”

“Yes, it is, is Eevee going to be fine?” Mark asked very quickly.

“What was an Eevee doing there?” repeated Nurse ‘Joy’.

“Should I know that?” Mark said loudly. “I asked: Is he going to be all right?”

Nurse Joy took out a small tool resembling a red cellphone, pointed it at Eevee and pressed a button. A little beep was heard before she took it and read off it.

“He’s just exhausted, hungry and cold,” Nurse Joy announced upon looking back at Mark, smiling. “He will be fine, but it could take some time to revive him. Just have a seat, and I’ll alert you when something happens.”

Mark sighed in relief as Nurse Joy took Eevee into the room at the back, then turned around and as he was now breathing normally again, he took some time to look around.

The floor was covered in a light pink, fluffy carpet. The room was very large, and at random places all over except in the direct path from the automatic door to the counter, there were big, comfy-looking red sofas. Several trainers sat in them, either chatting or just staring into thin air, waiting for their Pokémon to be healed.

Mark walked towards the nearest sofa, which was empty, and sat down there, tapping his foot impatiently while observing the room better. The walls were painted white, but covered in posters and advertisements about everything from the Ouen league and challenges for trainers to always carry Potions with them to cheap travel packages. Meanwhile, Charmander stood at the foot of the sofa, watching his tail flame burn.

The automatic door slid open, catching Mark’s attention. A girl ran inside. She had long, brown hair and wore a pink sweater and a dark blue skirt.

She hurried to Nurse Joy, quickly handing her three of the Pokéballs attached to her belt, and then walked towards Mark’s sofa and sat down in it, glaring anxiously at the back room where Joy was treating her Pokémon.

Seeing as Mark had nothing better to do and many things to ask, he decided to talk to the girl.

“Um, excuse me…” he said, turning carefully in her direction. She jerked her head in his direction, and upon realizing he was waiting for an answer, she replied with a dry “Hello”.

“Do you live here?” Mark asked. The girl nodded.

“Can you tell me something about the Pokémon Gym here?”

The girl shrugged. “Sure. What would you like to know?”

“What type of Pokémon does the gym leader train?” Mark asked, happy to have managed to get to the point so quickly.

“What?!” Mark yelled so loudly that a few people stopped talking to stare at him. He lowered his voice, his face going red. “Erm… how does a Gym leader train Legendary Pokémon?”

The girl giggled. “You’ve never heard of Rick? He spent ten years of his life finding the Legendary Pokémon of all four regions. He got some hairs, feathers, whatever of them, and cloned the Legendaries for himself and his junior trainers. They don’t train them much at all, though, so they’re really low-leveled.”

“Super-clones are illegal,” the girl corrected. “And only if they could wreck something. His Pokéballs prevent the Pokémon they hold from directly disobeying a command, making them harmless. He made the balls himself. He even got a special license allowing him to keep one super-clone, no higher than level ten, mainly for experimental purposes.”

“But affecting Pokémon’s free will is breaking the Agreement!” Mark argued. The girl just shrugged.

“Yeah, maybe, but Rick’s got the police in his pocket. He’s capable of world domination with all those legendary clones, and they know it only too well. As long as he isn’t doing anything they absolutely have to do something about, they won’t. They’d get completely screwed unless they attacked in hundreds.”

“But he isn’t about to do anything like that, is he?” Mark asked worriedly.

“Of course not, he’s a respectable man with a little brother,” said the girl.

“What’s a little brother got to do with anything?” Mark questioned, puzzled.

“Their parents died in a car crash when Rick was fifteen, leaving him alone with his two-year-old brother,” the girl explained. “Rick has been like a parent for his brother since then. Shows that he’s responsible and knows what he’s doing.”

“Well, nobody knows, since he only uses the Kanto and Johto ones, but that’s what they say.”

“So, are all of the Legendaries at very low levels, then?” he then asked.

“Yeah, they don’t go higher than level 15,” the girl said. “And the more Pokémon a junior trainer has, the lower are their levels. The strongest ones are possessed by the junior trainers with the fewest Pokémon.”

“But remember that they’re Legendaries after all,” she warned him.

“OK, thanks,” Mark said, and was about to ask something else when Nurse Joy stepped forward and pointed for both of them to come. Both kids stood up and walked towards the counter.

“Megan, your Pokémon have been fully healed,” Nurse Joy said with a small bow, handing three Pokéballs to the girl, then turning to Mark, “and your Eevee is going to be in perfect battle condition tomorrow. The hotel is just round the corner, if you plan on staying there.”

“Battle condition?” Mark questioned. “But isn’t he too young to battle?”

“Technically, yes,” Nurse Joy sighed. “But he’s been battling, apparently. Got some Rattata bites and scratches. Goodness knows what he’s been through…”

“Oh, okay,” said Mark. “But I’ll release him afterwards, right? He isn’t caught in a Pokéball…”

“Well…” said Nurse Joy sadly, “I have to admit that I don’t think that’s a very good idea. He’s been battling, but hasn’t fared all too well. If he came across a Raticate or Sandslash…”

“You mean I should take him?” asked Mark, shocked.

“I mean that we should explain the situation to him when he wakes up, and ask him what he wants to do.”

Mark didn’t answer; he wanted to own an Eevee, of course, but tried not to because he knew then he’d be disappointed if Eevee rather wanted to be released.

“Yeah,” said Mark, snapping out of his thoughts. “Anyway, thanks. I’ll come back tomorrow.”

Next, Mark went to the Pokémart with Charmander. It looked a bit like the Pokémon center beside it; a big, white building with an automatic door and a dome-shaped roof, except that instead of the Pokémon center’s red color, the Pokémart’s roof was blue. Beside the door, a large sign clarified the building’s identity.

Mark walked inside. To the left, there was a counter with a funnily-dressed punk guy behind it, busy claiming cash for people’s purchases. To the right, metallic shelves with healing items, Pokémon food, and all sorts of Pokémon equipment stood in straight rows all the way to the back of the shop.

Mark examined the contents of the first shelf. They were healing items; to the far left, cheap Potions and status recovering items were stacked; then they gradually went more expensive as they went farther to the right. Mark grabbed a few of the purple and green spray bottles known as Potions, then walked a few steps on. Most of the things he wasn’t all that interested in; this early on, they wouldn’t be worth their price.

At the end of the row, he stared longingly at a little white box with a red cross on it; a Pocket healer, one could place a Pokéball into it and press a button, and the Pokémon inside would be refreshed with energy in an instant, besides gaining a boost to its natural recovering abilities while inside, being able to fully heal of all its wounds in a remarkably short time. Of course, this item was reserved for out-of-battle usage.

Unfortunately, the price tag contained the rather unattractive number of 98,000. Mark quit dreaming, and went on.

He browsed through the shelves. Stat-boosting items were for more advanced trainers, and he didn’t want to buy TM and HM moves until he had planned his Pokémon a bit better. If Eevee would come with him, he would maybe buy an evolution stone for him; of course, he reminded himself as he walked past them, Eevee might not come with him at all, and might not want to evolve, or would rather evolve into Espeon or Umbreon.

The Pokédolls he wasn’t too interested in, but near them were the Pokéballs and Pokéball belts, so Mark took one belt with six Pokéballs attached to it. Finally, he bought a bit of canned Pokémon food for Charmander and Eevee, and walked to the counter in order to pay. All this stuff put a huge dent into the money he had brought, but that was what the money was for, after all. He just hoped he had enough left for the hotel.

Once outside, Mark pressed the little buttons on the Potion bottles one by one, minimizing them to the right size to fit neatly into his backpack. He also put on his Pokéball belt. He checked his watch; it was six o’clock, and the rain had subsided. Finally, he stuffed the cans of Pokémon food into the bag; it was now getting full.

He eyed the hotel sign behind the shop, picked up his bag with a sigh and walked to the hotel, Charmander following him like a fiery ghost.