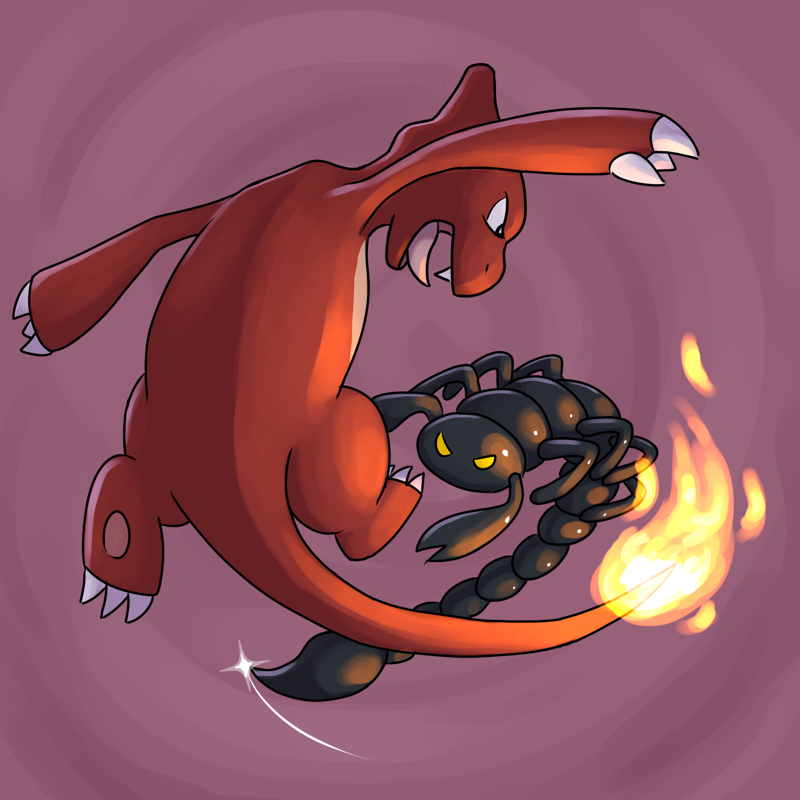 Mark walked nervously forward as May pocketed her badge and stepped out of the way.

“This battle will be a three on three,” Mitch said calmly, inserting his Pokéballs into a Pocket Healer. Mark noticed that Mitch had a fourth Pokéball at his belt, too. “No healing items of any sort may be used on a Pokémon while the battle is going on. A recalled Pokémon counts as a fainted Pokémon.”

He took a ball and threw it. The light from the sphere materialized into the yellow bee that Mitch had used earlier.

“I choose…” Mark’s hand fiddled with his Pokéballs. Charmeleon would definitely be the best choice, but then again, Mitch had a Pokémon that Mark hadn’t seen yet, which might be powerful. The best trainers always said that you should leave your strongest Pokémon until last – provided that it wasn't much better suited to some earlier opponent.

Mark paused. Earlier Mitch’s Pokémon had all been Bug/Poison types; this meant that unless it was just a freaky coincidence, he probably only trained Pokémon that had both types.

He took out a Pokéball. Beedrill weren’t the strongest Pokémon around, and Eevee could probably do with a bit more battling experience.

Mitch nodded as the small furred creature came out of the ball. “Interesting,” he simply said.

“Eevee, try a Quick Attack!” Mark said determinedly, hoping that Eevee could bring himself to attack the Beedrill. He did; he hesitated for a second, but then leapt into the air and tackled the bee Pokémon at high speed. It was knocked backwards, but retaliated by swooping down and jabbing Eevee with the stingers on its forelegs. He staggered backwards, then blinked and faced Beedrill again with a determined “Vi!” His battling instincts were clearly starting to show.

“Twineedle,” said Mitch simply, and Beedrill dove down again, its foreleg stingers raised. Eevee seemed to freeze for a moment, but then jumped out of the way, narrowly dodging it. Beedrill swooped upwards again to avoid getting hit.

“Eevee, use… um, maybe Tail Whip?” Mark suggested, realizing immediately afterwards that he had forgotten to sound like he knew what he was doing. Eevee didn’t appear to mind; he crouched down low with his tail in the air, and started wagging it back and forth. While Beedrill’s glossy red compound eyes watched Eevee’s tail tip, he jumped up and tackled the bee again in mid-air.

“Poison Sting,” Mitch commanded, just as Beedrill was thrown backwards. The bee instantly obeyed, lunging at Eevee as he landed on the gym floor and stinging him with its right foreleg. He shuddered, but countered by kicking some sand that seemed to materialize under his feet into the bee Pokémon’s eyes. It didn’t appear to be much more than a distraction, though; a creature without eyelids had to be designed not to be bothered by sand in its eyes.

“Veeee,” Eevee moaned with a dazed look in his eyes. Mark realized that the Beedrill’s poison was starting to affect him.

“Don’t give up, just get one more hit in with Quick Attack,” he said desperately. Eevee used his last strength to leap up and hit the bee once again. It was thrown into the wall, where it fell down, unconscious.

With a faint smile, Mitch took out another Pokéball. He threw it without words into the middle of the arena, where it released his Venomoth. It flapped its wings slowly, watching Mark with its creepy, staring eyes.

He thought about what to send out. He still wanted to save Charmeleon for last. The best trainers never recommended training a Pokémon to become much stronger than the rest of the team, so he would rather not use Scyther. That left Gyarados. He hadn’t gotten any training in the desert anyway, so he was a few levels behind.

“Go, Gyarados!” Mark announced, throwing the Pokéball towards the pool on the left side of the arena. The sea monster materialized from the red light, apparently not feeling up for his normal roar since he just growled slightly.

“Dive, quickly!” Mark blurted out. Gyarados disappeared beneath the surface of the water and was not affected by the powder.

“Psybeam, Venomoth,” Mitch said as Gyarados came up again. His Pokémon fired a rainbow-colored beam of psychic energy into the monster’s face. He retaliated by grabbing the moth in his mouth with a quick movement.

“Psychic and then Stun Spore,” Mitch ordered his Pokémon. Venomoth, still locked between Gyarados’s jaws, glowed bright blue, and as the eerie aura engulfed Gyarados, he was forced to open his mouth and release the captive. As soon as Venomoth was free, it flapped its wings rapidly to send another flurry of sparkling dust at the sea monster. Some of it escaped in through his nostrils, and his long segmented body immediately stiffened, allowing more of the paralyzing powder to enter his bloodstream as he inhaled it.

“Gyarados, do something!” Mark cried desperately, having no idea what to do. With difficulty, the immobile monster closed his eyes and Mark saw him starting to get grayer.

“Is that…” he gasped, just as Gyarados’s eyes snapped open and fired the same type of bright red beam as he had used on Suicune. This time, an even more amazing effect of it was revealed; Venomoth fluttered out of the way, but the beam followed of its own accord and blasted the purple moth Pokémon across the arena. On the way, ice seemed to start layering around its wings, and it fell to the ground with a clatter, clearly frozen.

The Pokéball’s beam zapped Venomoth into the ball again. Mark looked at Gyarados; he was still rather grayish and appeared very exhausted, not to mention his paralysis. He would hardly last very long like that.

“Return,” Mark said, recalling the sea monster back into his Pokéball too. “Guess it’s down to our last Pokémon, then.”

“Indeed,” Mitch agreed, smiling. He took out a Pokéball; it was the one he had not used against May.

Mark hesitated a bit, but took Charmeleon’s Pokéball, silently hoping that his assumption that Mitch’s Pokémon were all bugs was correct.

“Go!” Mark shouted. Both of them threw the Pokéballs at the same time; Mark’s became the red lizard, and Mitch’s formed into something smaller, with four sets of limbs, a tail and two pincers.

“A Scorplack?” Mark asked, staring at the shiny black scorpion. “The one that… didn’t kill you?”

“Of course,” said Mitch, smiling. “I told you I caught him.”

“Is he your strongest?” Mark asked nervously.

Mitch nodded. “Is that your starter?” he questioned back.

“Yes,” Mark replied with a smile. “Flamethrower!” he then called to his Pokémon.

Charmeleon spewed a bright spiral of flames from his mouth, but Scorplack darted to the right with surprising agility and avoided it.

“Watch out for the stinger!” Mark told Charmeleon quickly. “Try another Flamethrower!”

The lizard blasted out some more flames, which Scorplack also avoided. The scorpion then swung his tail at Charmeleon, who narrowly managed to jump out of the way.

“Keep at a safe distance, Charmeleon,” Mark said desperately. “Don’t let it come near you, and try to attack it with fire.”

Scorplack shot towards Charmeleon with his stinger raised. The lizard released more flames out of his mouth, but the scorpion leapt to the side.

“Darn dodger!” Mark gritted his teeth. Charmeleon growled in agreement as he ran out of the scorpion’s reach, slowing him down with a tongue of fire that he sent over his shoulder. Scorplack evaded it like the previous ones and then unexpectedly sped up, reached Charmeleon’s side and swung his tail at the lizard. The tail end stung into his arm and injected poison into his blood. He roared in pain, spitting out a ball of fire. It hit the floor just by Scorplack’s legs; he jumped up and ran to the side, Charmeleon following. Mark was getting worried; Charmeleon would faint any minute now, when the poison came into effect.

Mark watched the lizard shoot another Flamethrower and Scorplack running frantically to the side to avoid it. For a moment he expected Charmeleon to fall unconscious in a matter of seconds. Then, when he still didn’t, something hit him.

“Charmeleon!” he shouted. “You’ve been stung before; you must’ve gained an immunity to the poison! Move in for a physical assault; you don’t need to fear being stung!”

Hearing this, the lizard leapt forward, aiming for the scorpion. Not expecting it, Scorplack made an attempt to defend himself with his pincer, but Charmeleon came down on top of him and released a powerful blast of flames directly down at the scorpion’s head. Scorplack let out a screech, but then fell silent. Charmeleon turned to Mark and sent him a salute, grinning. Mark smiled back.

“Return,” Mitch said slowly to his Pokémon, holding forward the Pokéball. “Nice thinking there at the end.”

Mark just blushed, his smile widening as Charmeleon returned to the Pokéball in a beam of red.

“I confer upon you the Venom Badge,” Mitch announced, holding up a small object. Mark walked up to him and took it. It resembled a silver coin like the other badges; however, this one had small circular ripples in its smooth surface.

“Good luck,” said Mitch and smiled his faint smile. Mark nodded and ran out of the Gym; he was feeling all jumpy like he couldn’t just walk.

Victor looked after Mark as he ran east out of the town.

“Do you know him? And the girl who was with him when he came to town?”

Victor jumped. It was Mitch; he had seemingly been standing by his side without him noticing.

“Sort of, yeah,” he replied. “I battled him, and the girl came afterwards. Why?”

Mitch nodded sadly. “I just have this feeling something bad will happen to them.”