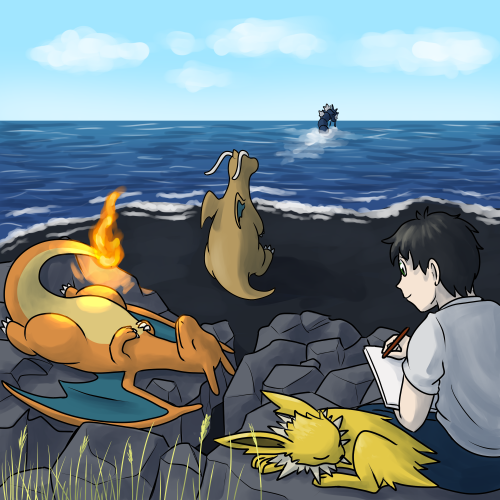 That's chapter 77 illustrated as well - i.e. all of them!

And with that, happy twentieth anniversary to The Quest for the Legends! On this day, twenty years ago, I started writing the original version of this story; today, age thirty-two, I've finished illustrating every chapter of the story, as well as putting up a new revision (the illustrations are now also viewable on each chapter's page).

Specifically, the new version, the "ILCOE patch" version, is the slightly edited version of the ILCOE I have been posting on the Thousand Roads forums over the past year. For the most part, these really are slight edits: grammatical errors or otherwise obviously non-native phrasing, editing some bits that really bothered me and could be trivially fixed in like ten minutes, and fixing some clunky sentences in chapters where everything isn't clunky sentences anyway. But I also did the revisions I'd been talking about wanting to do to chapter 76, if you still remember that. I did them in kind of a rush, because this was all on a deadline to get the last chapter posted today, and I may make further edits to it later, but at least, I'm a fair bit happier with this than the original version.

Finally, I drew some cover art for the fic for the occasion. There are a lot of things you could put on a cover for the story, and Mew and Chalenor may not exactly be the most representative, but they are behind it all, and as a bonus make for a more minimalistic, nicely-composed cover than some of the cluttered messes you could make out of this. 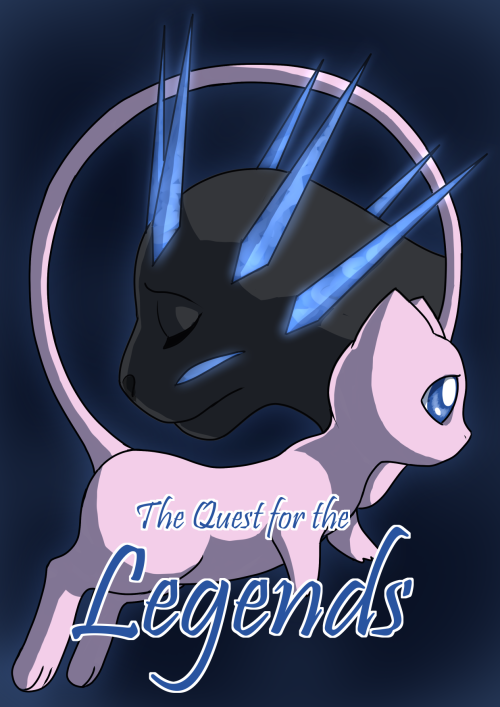 Happy anniversary, dear fanfic! I expect this site to be going largely dormant for now, until whenever I get around to the proper rewrite; maybe I'll do anniversary posts, I may continue to do anniversary art for the fic, and if I make those further edits to 76 I'll let you know, but other than that I don't expect there'll be much to post here.

Thank you all for being with me on this journey!
COMMENTARY DONE

CarmineKnight (Maddox-knight/SilverLatios) (06/20/2022 18:50:29)
It's been delightful seeing the chapter arts, I still come to this minisite regularly. Appreciate all the tQtfL stuff that's still been popping up since the fic has been finished, it still occupies so much of my "Pokemon fanworks" brain and I think about it all the time. Looking forward to the eventual rewrite of this, but also Morphic.

Shoutout to Vulpix on the verification, one of Mark's favorites.

Can't believe you're still open to a rewrite after all of that - theorising it'll take less than another 10 years? 😁

Negrek (07/05/2022 12:38:49)
Congrats again on finishing this project, and happy 20th anniversary to TQftL! To mark the occasion, I thought I would make some chapter art to go with my very official spin-off of the fic, so that it matches the other chapters of the story. (Sort of…)

I realized WAY late into the process of making this that Letaligon's mask is quite off-model. That's just how I always thought the masks work, oops, so I guess you can enjoy gazing upon my personal headcanon for what a letaligon looks like, I guess.

Congrats again on making it all the way through the chapter art project! And with time to spare! (Plus cover!) Huge respect for sticking with such a big project long-term, and even finding the time to do some extra art on the side along the way. Just curious, did you have any particular favorite cover arts? Any that were particularly interesting or difficult to draw?

Just wondering, is chapter art something you'd like to try again, maybe for illustrating Morphic, or more of your one-shots? Anything interesting you learned over the course of making these? I think there's clear improvement as you went along with them… so I hope you felt that, too!

As for favorites, I'm fond of the ones you named as well (although Carl being in the sofa permanently Bugs Me aaaargh); 64, 62 and 38 are definitely favorites. Others I'd name for just generally coming out really well overall are 47 and 16. 54 and 72 are fun close-up expressions. And I'm actually surprisingly fond of 19 and 25, they're very simple but they came out exactly how they were supposed to which is always pleasing. Dark horse fave may be 69, which isn't perfect but I'm fond of it.

I don't know that I expect to make a habit of doing this for everything I write; I feel like I'd be terribly out of my depth on Morphic chapter art, and it'd bug me more how clumsy it would inevitably be when attached to to a story that's a lot more serious, takes place in a more photorealistic and less anime world, and that I didn't start when I was twelve. But I definitely expect to continue doing art related to my fics. Quite possibly I'll try to do a cover for Curse when I finally get it posted on TR. Maybe. And I think I'd enjoy making art for Go! Pidgey just tapping on the window would be cute.

Lessons learned… humans are terrible, even drawing the same humans for a year only helped a little for my ability to make them remotely consistent, I really need to look at more tutorials and see if it helps any. (I guess what I really need to do is the kind of careful decomposition I did for all the Scyther heads in Sutoraiku High, but what are humans.)

On the other hand I think I did improve tremendously at trees, rocks and water. Finding references is terrible and makes you unable to think about anything other than how you cannot make anything actually look like the reference but it still helps, just doesn't feel like it.

Negrek (07/06/2022 21:41:22)
Forty-seven and sixteen DID both come out really well. Definitely on my longlist of favorites, but I wanted to be somewhat restrained in the number that I mentioned. I can tell the various close-up facial expressions were a lot of fun, too. (Close-ups of people in distress, generally; hmm wonder why that is.) Sixty-nine is a fun one, too! One of the more atmospheric covers, I'd say.

I take your point about Morphic really needing a different style for its chapter arts. Something more abstract like 64 seems like it could work well there… I think that one captures a more grim/moody tone, but yeah, I could see how things being off would bother you more for that story, too. That Go art idea sounds really cute! I will submit that if you finish that Charizard and Litten one-shot that would also give you the opportunity to draw some cute Charizard and Litten art to go with it…

Humans are terrible. Real facts. Although I thought you did a pretty good job with the consistency; didn't notice any problems there myself!

You definitely did improve a ton at your environments. Guess it's time to write something camping-focused to show off your new trees and rocks skills! Glad you pushed through and completed all your drawings even when it felt like things weren't coming out the way they should.