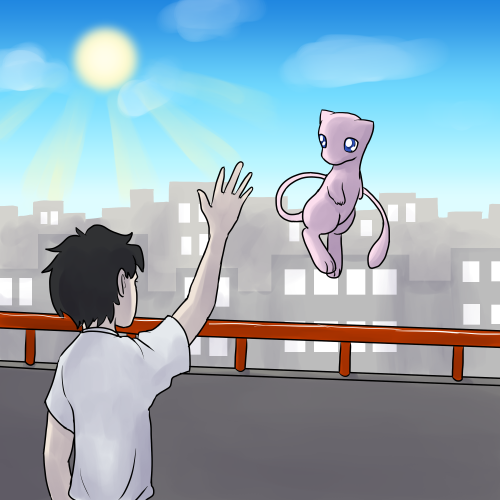 Not too thrilled with this one, city background hard, but I do like the Mark from the back.
COMMENTARY DONE

Not sure if you're at all interested in critique on these, so skip this if not! One thing I've noticed is that these chapter illustrations tend to have a lot of negative space, this one included. It might be a good idea to get in a little closer on the characters, or rearrange the compositions a bit so that you can bring them closer without as much empty space around them. Chapter 7's art was another that felt like it had a lot of empty space to me.

Butterfree (08/15/2021 09:59:25)
Yeah, definitely agreed on chapter 7 feeling a little empty. I'm not sure zooming in on May would have made it better, though! I fiddled around with trying to do that but raising the horizon looked weird, as did making her bigger while keeping the horizon and thus her eye level. Might have considered, like, just putting more stuff in the foreground, one way or another? Dunno. Probably would have been possible to go with some entirely different composition but by this point I'd already sketched her and didn't want to scrap the whole thing while on a timer to complete the project.

Not sure I'd want this one closer either; kind of want some breathing space around Mew, plus that the focal point being closer to the 1/3 mark is more pleasing than having it more up in the corner. The empty space on the balcony beside Mark does bug me, though! Maybe I should've just put something there. Or, as you say, some alternative composition, but I think I'd always arrange this one in a way where there's a fair amount of breathing space around Mew? The whole point here is freeing Mew, and it feels counterproductive to frame that very closely. Unless you had something in mind that's not occurring to me?