(printable version - Back to The Quest for the Legends Minipage) 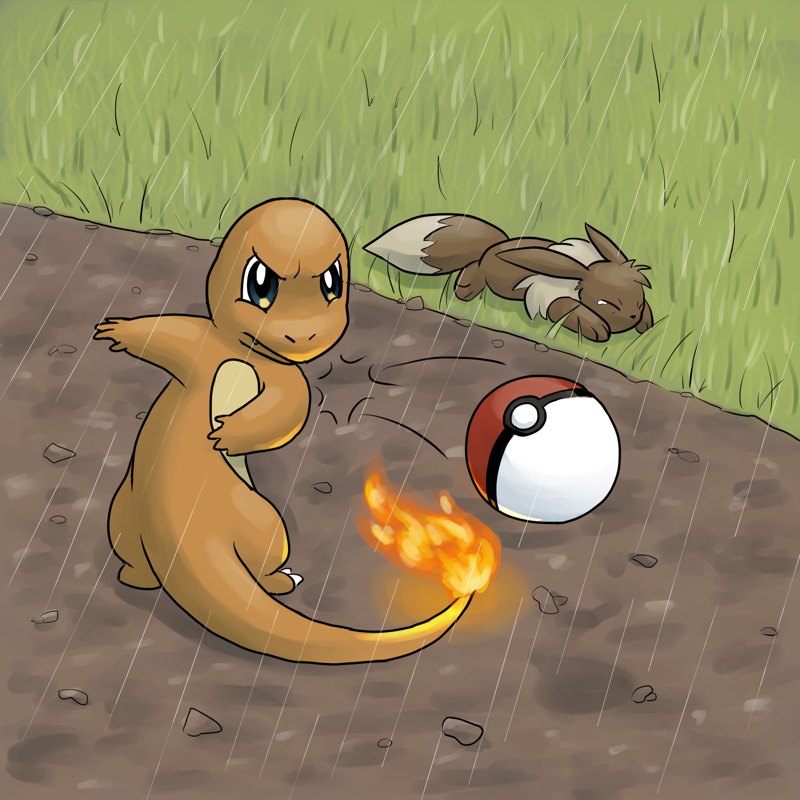 When Mark was out of the library, Charmander was sitting on the stone steps, his head resting against the shiny wall and his eyes closed peacefully; basically, he was looking absolutely adorable, attracting quite a few ‘awww’s from passers-by.

Small drops of water started falling, prickling down his beautifully light brown fur coat and soaking the soft, creamy-colored ruff around his neck. He shivered, but kept running.

“Yeah, I’ve been through more rain,” said Charmander casually, obviously referring to the one Mark saved him out of.

He was far too exhausted to run, but the knowledge that by every passing second, his greatest fear was more likely to have come true, drove him on.

His forepaw hit a small rock hidden in the wet grass. He tried to keep his balance, but tumbled over. He got up right away and despite the pain nailing his left front paw, he aced it and kept going at the same pace.

“Of course you should,” Charmander said, looking down. “But most trainers wouldn’t, that’s why I was surprised. My old trainer wouldn’t.” He spat the last words in a resentful tone.

“Yeah, that’s one thing,” Mark said thoughtfully, “did your trainer release you?”

“Well… he battled a girl with a Quilava once. Didn’t use me for it, he never used me at all. But she beat him and he showed her me, lied that I was level 15 like her Quilava was, and asked to trade. She bought it, she didn’t really appear to like her Quilava all that much for whatever reason. They just did an unofficial trade by handing each other the Pokéballs, and then my trainer quietly made himself disappear. Then it appears that when the girl registered me to her Pokédex and found out I was level five, she tossed the ball to the ground in anger and ran after my old trainer, so I popped out of the ball and was left there. Then I just walked off in a random direction, and ended up in that monsoon.”

He eyed the road and the cars just a few meters away, and made his hopeless decision.

He carefully came a bit nearer, and saw that it was a little brown furball with long, rabbit-like ears. A thick, creamy ruff covered its neck and a bushy tail extended from its backside. It was flailing around a bit, apparently trying to crawl but not really being successful.

“What was it for?” Charmander snapped, raising up his tiny thumb. “One: He’s unconscious.” Charmander raised his forefinger, continuing: “Two: He’s obviously too young to battle at all, don’t you see how small he is?” He raised the third miniscule finger: “And three: He’s in an absolutely terrible state; he’s obviously been through hell before we came here.” He lowered his hand firmly. “Don’t you know the Agreement? If a Pokémon is caught while unable to put up a fair fight for its freedom, it is free to ignore or even attack its trainer until released back into the wild.”

“A male, you say?” Mark questioned.

Mark slowly walked towards the fainted Pokémon, bent down and touched the fur on the head. It was soft, thick and very smooth, but with a few twigs tangled in it. He brushed them off, and the Eevee’s body twitched a bit.

Carefully, he picked the Pokémon up. Its body was warm; Mark felt weird holding it. He stroked a few times over the fur on the head with some soothing words, and to his delight found that Eevee’s eyes opened a bit.

“Vuii!” he shrieked and weakly struggled to get away, but Mark held him tightly. Eevee seemed to find the warmth from a living body to be somewhat comforting and in the end just curled himself up in his arms.

For a few seconds, Mark just stood there like in a trance, but then snapped out of it.

Pokémon © 1995-2010 Nintendo, GAME FREAK and Creatures Inc. The Quest for the Legends and its characters, locations, storylines, extras, spinoffs, etc. © 2002-2010 Butterfree/Dragonfree/antialiasis except when otherwise stated or stemming from official sources.